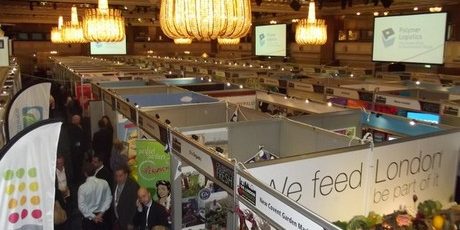 Although we’ve trodden the well-worn path around Berlin’s Fruit Logistica on countless occasions, RED Communications has never itself had a stand at a trade show before. So we didn’t know quite what to expect when we were invited to exhibit at the first ever London Produce Show.

The show – headed by the US’s Perishable Pundit, Jim Prevor, and the UK produce industry’s Tommy Leighton – was set up as a forum for produce suppliers, wholesalers, caterers, chefs and retailers to get together and, to coin a hashtag #celebratefresh. It was held in the Great Room of the Grosvenor hotel.

We set up a joint stand for RED Communications and WineTrust100, our wine retailing sister business, which sets out to sell wines chosen by experts and sold at affordable prices.

The foray was well worth the effort. Amongst the other exhibitors and the good number of visitors on the day we met present and prospective clients and met some interesting people along the way – including a mother turned fresh produce guru who now goes by the name The Rainbow Fairy.

Thought for the day: The advent and growth of digital media makes it easier than ever to communicate with clients, journalists and suppliers from our desks or mobile devices. But there is (thankfully) still no substitute for meeting people face-to-face